Fritz Grünbaum was a clear target for the Nazis. He was a Jewish law school graduate and decorated World War I veteran turned pacifist and an outspoken man of the arts with a platform as a Viennese cabaret performer. On the day Hitler invaded Vienna, he entertained nightclub guests as he groped onto a darkened stage with the sardonic quip, “I see nothing, absolutely nothing. I must have gotten myself into National Socialist culture.” This was followed by an artistic ban on all Jews and, within days, Grünbaum was interned at Dachau Concentration Camp where he would later die.

Grünbaum was also a serious art collector. Before the war, he had acquired over 400 works by such notables as Rembrandt, Degas, Rodin, Durer, and Schiele. Grünbaum’s entire collection was confiscated by the Nazis after his arrest. Now, over eighty years later, Grünbaum’s heirs have been granted rights to two of the Schiele works from that collection that are together valued at $5 million. In a thoughtful opinion by Justice Anil Singh issued on July 9, 2019, New York’s Appellate Division – the state’s intermediate appellate court – largely affirmed the lower court’s April 2018 decision holding that Grünbaum’s heirs had shown a superior right of possession to the Schieles and were entitled to summary relief. 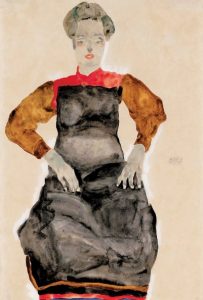 At the start of his brief career, Viennese Expressionist Egon Schiele used gouache, watercolour and pencil to create “Woman in a Black Pinafore” (1911) and “Woman Hiding Her Face” (1912). Both artworks, along with seventy-nine other Schieles, were acquired by Grünbaum prior to his arrest.

In 1938, while interned at Dachau, Grünbaum signed a power of attorney in favor of his wife who was required to allow an inventory of Grünbaum’s property, including the art collection. The inventory prepared at the behest of the Nazis is surprisingly short on detail and only generically refers to the artworks. An unstamped export license suggests the collection remained in Austria during the war.

In mid-1956, Austria’s limitations period for looted art claims expired. Months later, the artworks, along with sixty-three other Schieles, surfaced at Galerie Kornfeld in Switzerland and were purchased. The 1956 auction catalogue listed both disputed Schieles without a provenance but did list Grünbaum’s ownership for Schiele’s “Dead City III”. (“Dead City III” was later seized by New York’s District Attorney while on loan at the MoMA in the late 1990s due to its disputed ownership.) 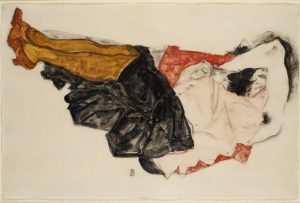 In 2004, the Art Loss Register issued a warning that “in light of the ‘Dead City III’ litigation, there was a ‘remote’ chance of a title claim” against “Pinafore” as it was from Grünbaum’s Schiele Collection. Despite this, London Dealer and Schiele Expert Richard Nagy purchased a fifty percent share in “Pinafore” the following year. Nagy released that interest for a two-year period due to a suit against Grünbaum’s heirs over another looted Schiele attributable to Grünbaum, “Woman With Bent Left Leg”. Bakalar v. Vavra, 819 F. Supp. 2d 293 (S.D.N.Y. 2011), aff’d 500 Fed. Appx. 6 (2d Cir. 2012), cert denied 569 U.S. 968 (2013). After a 2013 decision adverse to the heirs based on laches in Bakalar, Nagy then reacquired his interest in “Pinafore” and also purchased Schiele’s “Woman Hiding Her Face” under an agreement that unequivocally listed Grünbaum in its provenance until his death in 1941.

In 2015, the artworks were seized after being exhibited in New York, and this suit followed. Last year, Nagy was ordered to turn the works over to Grünbaum’s heirs, a ruling that prompted the instant appeal.

Nagy Was Unable To Show Superior Claim to the Artworks

After the Court found Grünbaum owned the artworks in dispute and had not voluntarily transferred them, Nagy was faced with the burden of showing they were not stolen, which he could not do. At the outset, Nagy and his gallery defeated their own argument that the heirs failed to prove Grünbaum’s ownership of the artworks; their answer had stated the artworks shared a provenance with  “Dead City III” and “Woman With Bent Left Leg” – works shown to have Grünbaum provenance by way of the 1956 Catalogue and the Bakalar findings, respectively, not to mention the provenance confirmations by Art Loss Register for “Pinafore” and Nagy’s sales agreement for “Woman Hiding Her Face”.

Nagy’s experts also attempted to show Grünbaum’s power of attorney was valid, making subsequent transfers of Grünbaum’s collection (ultimately to Nagy) valid. Justice Singh minced no words in finding Grünbaum was under duress when he signed away his rights: “We reject the notion that a person who signs a power of attorney in a death camp can be said to have executed the document voluntarily.” Citing New York’s common law, Singh found a “manual taking” was unnecessary to establish the heirs’ claims for conversion or replevin.

The Court rejected the “speculative” defense theories explaining how Grünbaum’s collection reappeared in 1956. One such theory was that Kornfeld (a Nazi-looted art trafficker) received the artworks on consignment from Grünbaum’s sister-in-law, Mathilde Lukacs. Noting the “standard Nazi practice” of never returning confiscated property, the questionable records related to Lukacs’ alleged consignment, and Lukacs’ own detention during the war, the Court found the theory unpersuasive.

Under New York law, Nagy could only receive good title to the artworks from a seller with good title to give. Since no evidence was presented to show anyone involved in the sale of the works since Grünbaum’s death had good title, Nagy was unable to prove he held title superior to the heirs.

The HEAR Act Tempered the Burden Borne by Grünbaum’s Heirs

The Holocaust Expropriated Art Recovery (HEAR) Act of 2016 framed the outcome of this case. Because the Act was passed shortly after this case was filed, the adverse (laches) ruling against Grünbaum’s heirs in the pre-HEAR Bakalar case had become “irrelevant” according to the lower court; the appellate court agreed. Applying a liberal interpretation to the Act, the Court highlighted its purpose — to ensure Nazi-looted art claims are not unfairly dismissed due to imposition of a stringent evidentiary burden on Holocaust victims or their heirs who can only marshal a “fragmentary historical record ravaged by persecution [and] war” (HEAR Act, Section 2[6]).

In concluding that the burden on Grünbaum’s heirs to show superior title to Nagy must be balanced with the purpose of the Act, the Court has added significantly to the body of precedent supporting future restitution claims. See also Philipp v. Federal Republic of Germany, 248 F.Supp.3d 59, 70, (D.D.C. 2017) aff’d 894 F. 3d 406 (D.C. Cir. 2018), a dispute also covered by the HEAR Act, involving the medieval artworks known as the Guelph Treasure (Welfenschatz) and their forced sale from a consortium of Jewish art dealers in Germany in 1935.

The Court’s Decision Is a Tribute to Grünbaum’s Legacy

Of all Mr. Grünbaum’s accomplishments, the most striking may have been his resilient spirit. He is said to have performed for fellow inmates throughout his time as a Nazi prisoner, including a New Years Eve performance in 1940 at the Dachau infirmary just before his passing. Grünbaum’s wife had the somber duty upon his death to sign a declaration that certified the contents of her once-wealthy husband’s estate: “There is nothing left.” This decision is a meaningful amendment to that declaration.