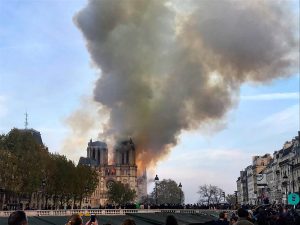 Following the devastating fire at Notre Dame Cathedral last April in Paris, which we covered here, and in yet another example of how climate activism has recently become entangled with the arts and the cultural sector, there has been strong criticism from one environmental activist group in Paris regarding lead poisoning concerns.

In case you are wondering what is the connection between lead poisoning and the Notre Dame fire, it stems from the fact that the materials used in the construction of Notre Dame back in the Middle Ages were heavily composed of lead. As such, when the fire started it is estimated that around 300 tons of lead melted, meaning that poisonous lead fumes were released freely into the air and into the heart of one of Europe’s main capitals.

Given the sheer number of visitors as well as residents circulating in the area on a daily basis, it is very hard to estimate how many people could have come in contact with the poisonous fumes, especially since, as this activist group argues, the public authorities seem to have done very little to nothing in the aftermath of the fire to contain them. Given that lead fumes have well-documented toxic effects, the accusation that authorities have not been diligent enough in addressing this concern is very problematic. Nonetheless, it was reported earlier this month that a large area would be closed off to the public precisely to address these concerns. The closure took effect from early August, but more recent reports show that, following a de-contamination initiative, the area has already been re-opened and construction works resumed.

However, the issue is far from being resolved, as Robin des Bois, the aforementioned environmental activist group, has filed a lawsuit against an indeterminate number of public authorities in France both at municipal and national levels of government, claiming they were negligent in addressing this issue, going so far as to a ‘deliberate endangerment of people’. In the meantime, it would seem that the authorities have started taking some action, as per the de-contamination initiative discussed above, which also specifically targeted schools and involved children being tested, but as those actions took place months after the incident, it does leave one wondering whether the authorities are doing too little too late. Whilst the Deputy Mayor of Paris stated that there is no danger, the lawsuit is still pending trial, so watch this space for further developments.