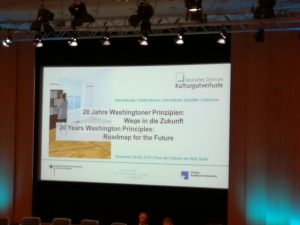 The adoption of the Washington Conference Principles on Nazi-Confiscated Art by 44 nations in 1998 marked a deeply significant moment in the development of cultural policy in the 20th and 21st centuries. Whilst the extent of looting perpetrated by the Nazis during the 1933-45 period was fairly well understood at that stage, few would have predicted that the process of identifying and restituting the stolen works would still be very much a ‘work in progress’ two decades later. This, however, was the overriding message of the major conference held in Berlin last week (26th-28th November).

Hosted by the German Lost Art Foundation, the aim of the conference was to review progress on the implementation of the Principles to date and to map out the pathway going forward. As an eminent and wide-ranging cast of speakers addressed the 800 or so delegates, a number of key themes emerged. As regards progress, several speakers noted the vast expansion in provenance research and the increased dissemination of information about lost artworks through digitisation and improvements to databases. The numbers of restitutions successfully completed (for the most part voluntarily) was also highlighted as a positive indicator.

It seemed, however, that for every silver lining, there was a rather darker cloud looming just underneath. Let’s take provenance research for example. It was discussed at length by numerous speakers and panels, characterised as the fundamental underpinning of the quest for ‘just and fair’ solutions which lies at the heart of the Washington Principles. The past two decades have undoubtedly witnessed significant strides forward on this front, as attested to by the 260 or so provenance research professionals now working in Germany, many of whom were in attendance. Of these individuals, however, only a handful or so are employed in permanent positions, the remainder working on a project basis only, under temporary contracts. This was a matter of serious concern for many speakers and delegates, since it seems to send out the wrong message about the value, indeed, the necessity, of the job they do.

Another problem noted by speakers across numerous jurisdictions was the fact that whilst relatively systematic provenance research is now quite common in respect of national, and other public collections, the same is not true of private collections, nor of dealers and most auction houses (Christies and Sotheby’s being notable exceptions).

The good news was that developments in Germany over the past few years have started to address these issues with a new seriousness. Jolted into action by the Gurlitt case which involved the discovery of a trove of Nazi-looted art on an unprecedented scale, the German Government has significantly enhanced its funding for provenance research, extending this to private collections, and has overhauled its Advisory Commission (the’ Limbach Commission’, responsible for hearing Nazi-looted art claims). The establishment of academic posts dedicated to provenance research in a number of German universities is also a positive and noteworthy step.

Other themes where speakers noted both progress on the one hand, but frustration at the slower-than-optimum pace of change on the other, included that of international collaboration and harmonisation (or lack of). The discussion here was strongly reminiscent of that at the conference in London last year led by the UK’s Department of Digital Culture Media and Sport (“70 Years and Counting: The Final Opportunity?”). Certainly, a number of speakers in Berlin recounted admirable examples of project-based collaborations such as the operations of the  Gurlitt task force which involved researchers from Israel, the US, Poland, Austria, France and Germany and the PREP project which sees German and US provenance researchers undertaking exchanges to share knowledge and expertise. On a broader level however, the disparity in approach between States remains a major source of concern for claimants, who understandably feel aggrieved that the success, or otherwise, of their attempts to recover their stolen artworks can depend, to a large degree, on the arbitrary fact of where those works have ended up. It was noted that numerous countries have failed to implement the Principles at all (examples cited by Ambassador Stuart Eizenstat, who had been instrumental in drafting the Principles in 1998, included Hungary, Poland, Spain, Russia, Argentina and Brazil). Discussions between States which have adhered to the Principles (Germany, Austria, France, the Netherlands and the UK – all of which have established dedicated spoliation panels) demonstrated that even matters as fundamental as the considerations involved in reaching ‘fair and just solutions’ left room for interpretation.

This, of course, is a measure of the complexity and sensitivity of the issues involved. And while the picture as regards State implementation was perhaps a little less than rosy, hope was restored by some of the personal stories of those reunited with their lost family treasures. A  poignant account was given by the great, great granddaughter of a Jewish businessman from the small German town of Lϋneberg, whose family bible and other artworks were discovered by a provenance researcher at the town’s museum. The investigations which followed resulted in a vast family gathering in Lϋneberg, bringing together relatives formerly unknown to each other from all over the world, the restitution of the works to them, and the subsequent loan of these objects back to the museum.

Interestingly, the resolution in this case depended ultimately on the research, actions and determination of two individuals. No lawyers were engaged, nor any courts or mediators, and doubtless no-one quoted the Washington Principles to those involved. But would this story, and others like it, have had such a positive outcome without the backdrop of those Principles, or the actions of numerous States to implement them over the past twenty years? We can speculate, of course, but it seems to me that despite the evident frustrations over the pace of progress, the reference by Ambassador Eizenstat to a ‘glass is half full’ is a fair assessment. Moreover, it points to what is perhaps the more important message: that there is no scope for slackening off, lest we find ourselves with a glass which is no better replenished in another two decades. If anything, in these times of political unease and the rise of extremist politics, we need to focus ever more determinedly on the Washington Principles’ commitment to address deep historical injustices and to strive for just and fair solutions.