We’re delighted to share with you news that a rare sculpture by IAL friend and internationally renowned street artist Stik will be auctioned tomorrow, 20th September, by Christies, London, in aid of the charity Cardboard Citizens. 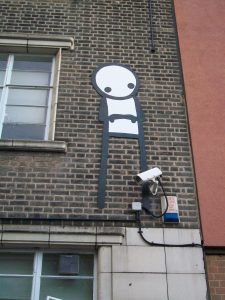 Stik originally created the piece, entitled ‘Up on the Roof’, for a 2009 exhibition, and from 2010 it dwelt on the roof of an arts centre in East London. He recently oversaw its removal and authenticated the work to raise funds for the charity which supports people whose lives have been affected by homelessness, through engagement in theatre projects. The estimated sale price is £15,000 – £25,000, a sum which will undoubtedly give a huge boost to the charity in its efforts to change the lives of those with whom it works. Stik himself was unfortunate enough to experience a period of homelessness, and it was then that he came across Cardboard Citizens, so his generous support for the charity feels very much like “the completion of a virtuous circle” as the charity’s Artistic Director commented.

As Stik explained when he spoke at an IAL seminar in 2016, he will only officially authenticate a work of street art where the proceeds raised will go directly back to the community. The authentication of street art can be crucially important in terms of value and perception, and is one of the many issues which make this area of creativity a fascinating one from a legal as well as an artistic perspective. It is an area which we have pondered numerous times on this blog, both in relation to Stik’s works and other cases which have hit the headlines: the Banksy case in 2015, where a Banksy mural which had made its way across the Atlantic was ordered to be returned to its ‘home’ in Folkestone was one example. Another was the more recent case in New York where a Federal District Court in Brooklyn opened the door for greater protection for graffiti artists following the whitewashing of a street mural at the well-known 5Pointz mural space.

For those interested in exploring these issues further, we will be discussing street art in one of the sessions at our forthcoming study forum on 20th October in central London.

Image: ‘Up on the Roof’ in its former location in East London (c/o Stik)