The ever-increasing volume of the call for urgent action on climate change is unlikely to have passed many readers by over recent months. From school strikes to mass demonstrations, the rise to fame of young climate activist Greta Thunberg and the ongoing ‘war on plastics’, the topic rarely fails to make headline news. 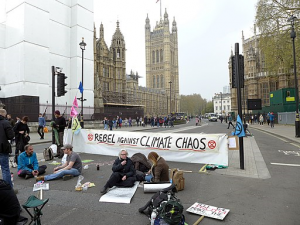 It is perhaps, in part, the gathering strength of this global movement which has sparked a stepping up of environmental activism directed at the cultural sector. The National Portrait Gallery’s eponymously titled ‘BP Portrait Award’, funded since 2012 by the fossil fuel giant, has ignited controversy on several occasions over the years. This year’s  protests were among the most high-profile seen to date, with dozens of campaigners blocking entry to the awards ceremony, followed by the submission of an open letter from more than 70 eminent artists expressing deep concern about BP’s sponsorship of the annual competition. The artists (including such names as Antony Gormley, Anish Kapoor and Rachel Whiteread) requested that the NPG should: decline to renew the contract with BP when it expires in 2022; seek alternative funding; and remove the BP representative from the Award’s judging panel with immediate effect.

The artists’ letter followed hot on the heels of news that the well-known Shakespearean actor Mark Rylance had tendered his resignation from the Royal Shakespeare Company in protest against BP sponsorship. In a strongly worded and heartfelt open letter, he charted his attempts, since 2012, to raise concerns about the institution’s apparent willingness to turn a blind eye to what he described as BP’s contribution to “cook[ing] our planet” through fossil fuel extraction.

On behalf of the NPG, Director Nicholas Cullinan was quick to point out the positive outcomes of BP’s support which, he maintains, has facilitated a programme designed to encourage talented artists from across the world and enabled free public access to the portrait awards. In times of decreasing funding for the arts, the ability to fulfil those core elements of a cultural institution’s mission becomes ever more difficult without support from the private sector.

A similar defence of the value of BP’s financial support for the arts was offered by Hartwig Fischer, the Director of the British Museum. At a recent press briefing marking the publication of the museum’s 2018/19 Annual Review, he spoke of BP’s support helping to “create unique learning opportunities”, and being “vital to [the museum’s] mission”. The British Museum, however, is no stranger to voices of protest. The activist group ‘BP or not BP?’ staged its largest demonstration to date this year in protest against BP sponsorship of the museum’s exhibition about the Assyrian King, Ashurbanipal, held from November 2018 – February 2019. Over 300 campaigners took part in protest performance art, featuring singing, dancing and speech-making.

Arguably, pithy statements from institutions about decreasing public funds and the need to fulfil the public service mandate are no longer enough in the face of opposition which has moved from the side-lines towards the centre ground. Indeed, a far more proactive and robust approach has been in evidence in recent months in response to the unfolding saga surrounding the Sackler sponsorship of UK arts institutions.

Even readers who haven’t been following the story are probably familiar with the Sackler name – many, no doubt, will have sat in the Sackler courtyard at the V&A, taken the Sackler Escalator at Tate Modern or visited the Sackler Gallery at The Serpentine. Fewer may be aware that much of the Sackler fortune is derived from the profits of a pharmaceutical company (Purdue Pharma) which produces the controversial drug OxyContin, blamed for many deaths in the US owing to its addictive nature. As we reported in March this year, an announcement that the Sackler Trust had withdrawn a proposed donation of £1M ($1.3M) destined for the National Portrait Gallery triggered something of a domino effect. Within a couple of days, a statement emerged from Tate’s board of trustees that they had decided not to seek or accept further donations from the Sackler family. Before the week was out, the Sackler Trust announced it was suspending all new philanthropic giving for the time being. Other institutions around the globe were quick to distance themselves from the beleaguered Trust, including the Met and the Solomon R. Guggenheim Museum in New York, and the Jewish Museum in Berlin. The Louvres is reported to be the latest institution to follow suit.

Why not the same response to companies whose activities threaten the future of the planet, the climate-change protesters argue? In contrast to the response to the Sackler situation, the approach of the sector to the climate change protests has been decidedly muted – some might say somewhat defensive and reactionary.

There is certainly no easy path for institutions through the ethical quagmire these issues entail. Whilst clear and transparent donations and grants policies are a helpful start, they don’t usually provide the clear-cut answers trustee boards seek. Like many ethical quandaries, these issues don’t lend themselves to the imposition of the ubiquitous ‘red lines’ we hear so much about: the answers are rarely black and white, but rather, they emerge from varying shades of murky grey. If there is one certainty we can take from recent events, however, it is that the voice of the climate-change activists will only grow stronger as the movement continues to garner global support. One way or another, it is a matter with which cultural institutions throughout the world will have to grapple for some time to come.