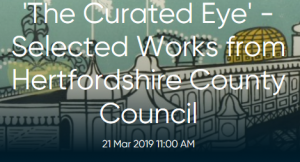 Cheffins Fine Art Auctioneers will today auction off some 428 paintings from a collection of over 1800 works owned by Hertfordshire County Council. The works to be sold include those by Barbara Hepworth and Keith Vaughan as well as highlights such as lino cuts by Edward Bawden and a pastel work by Scottish artist, Joan Eardley, which is expected to fetch £12,000 – £18,000. The sale is part of a wider deaccessioning programme by which the Council hopes to divest itself of more than 1,600 pieces (either by gift or sale) which it hopes could raise up to £400,000, according to one report.

The impressive collection of twentieth century British art resulted from a ‘Schools Art Loan’ initiative during the late 1940s to enable children across the region to access works of art. Despite the Council’s attempt to explain the sales as “the sensible thing to do” given that 60% of the collection was “languishing in storage”, voices of protest have grown louder as the sale date draws closer. A petition against the sales has now garnered over 2400 signatures and an open letter to the Council has been published by the artist Bob and Roberta Smith urging it to reconsider. The deep concern about the likely loss to the public of significant works of art is reminiscent of the response to the recent sales in the US from the Berkshire Museum and the much earlier (and perhaps even more controversial) sale of the Sekhemka statue by Northampton Borough Council for over £15 million in 2014.

Another recent story in the UK museum world which highlights yet again the financial pressures on local authorities was that of the staffing cuts made by Leicester City Council. It was reported that a restructure will result in the loss of four curator posts and their replacement by ‘audience and engagement’ staff. The changes were apparently prompted by a £320,000 cut in the council’s arts budget in the next financial year. The Council explained the cuts as part of an attempt to “move away from prioritising resource for subject specialist curation” in favour of supporting different perspectives and increasing the museum service’s relevance to more diverse audiences and ‘non-museum’ goers. While acknowledging the benefits of additional interpretation skills, a spokesman for the Geological Curators’ Group decried the loss of the specialist curators as “highly detrimental to the future of the collections and the reputation of Leicester Museum” which holds an internationally renowned geological collection.

These are worrying times for Local Authority institutions which lack the protection afforded by legislation that prevents deaccession from National bodies. Although sometimes regarded as something of a straitjacket, these restrictive laws at least relieve the immense pressures felt by non-nationals to sacrifice support of culture and the arts in the name of efficiency, ‘best value’ and austerity. While not wanting to end on a pessimistic note, it remains to be seen what impact Brexit might have on this situation, but it seems unlikely that the picture will be an especially rosy one.