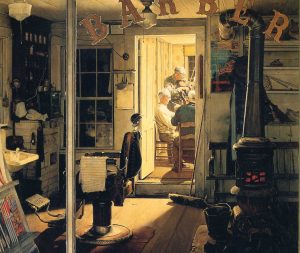 However, the proceeds of the Sotheby’s sale were somewhat disappointing, *only* bringing in $42 million compared to the expected $55-60 million. The pièce de résistance, Rockwell’s Shuffleton’s Barbershop, was privately purchased by the new Lucas Museum of Narrative Art in Los Angeles., which is exploring the possibility of lending the work to other museums, such as the Boston Museum of Fine Arts.  The other star of the sale, Rockwell’s Blacksmith’s Boy, fetched $8.1 million and a George Washington portrait estimated at between $200,000 and $300,000 was sold for $225,000.  Both works sold at the lower end of their estimated value.

In June 2018, Rockwell’s Shuffleton’s Barbershop began its stay at the Norman Rockwell Museum as part of the exhibition, Keepers of the Flame: Parrish, Wyeth and the Narrative Tradition, on view until the 28th of October 2018.

For the moment, the proceeds of the sale are invested with local banks while the Board of Trustees considers next steps to implement the New Vision initiative and other projects.

Another round of sales is said to be under preparation to make up for the shortfall of the auction.  Two objects, a Coromandel screen and a Chinese vase, are already advertised for the autumn Sotheby Asia sale in Hong Kong.

Meanwhile, the American Association of Museum Directors has issued a statement enjoining its 243 members to “refrain from lending works to the Berkshire Museum or collaborating with it on exhibitions”.  One may wonder how constructive these quasi-sanctions really are, but that is a topic for another day.

The Board of Trustees for the Berkshire Museum is also seeking to regain public trust and confidence.  The web page of the Museum contains a lengthy description of the process that led to the sales of 40 objects, pointing out that the Museum still houses 40,000 works and artifacts.  A large part of the Board’s statement emphasises that the Museum is a multidisciplinary institution, art being one of its fields.  Science and Natural History are the two other branches of the Museum, founded by Zenas Crane in 1903, who wanted to open a ‘window on the world’ encompassing more than just art.  The Board’s statement also features a list of FAQs, addressing some of the fears of the local community, such as whether the museum will become a children’s museum.

It seems we are reaching the end of a long and often bitter saga.   An actual or perceived lack of transparency certainly exacerbated the situation, as did the personal conflicts and negative media coverage.  Litigation and recourse to courts also contributed to the conflicted sentiments experienced by the local population, and the art community at large.  No doubt, the iconic value of Norman Rockwell’s work also raised passions, but fortunately, Shuffleton’s Barbershop will now have much greater visibility, for the time being at least.

Yet the question remains: how many more deaccessions are yet to come in light of changing times, demographics and technologies?  We already saw one botched deaccession earlier this year by the National Gallery of Canada, to say nothing of the controversial sale of the Sekhemka statue by the Northampton Borough in 2014.  But perhaps these, along with the Berkshire story, are indications of more to come as museums and other public institutions are continually squeezed for money.

For those interested in the question of museum deaccession, this will be one of the topics on our upcoming Study Forum, held at Notre Dame in London on Saturday, 20 October.