We reported late last year how busy the New York authorities have been in recent times in seizing and returning looted artefacts. The pattern has continued into the new year, with the widely reported return to the Egyptian Government of a first-century BC gilded coffin, acquired by the Metropolitan Museum of Art as the centre piece of a new exhibition just two years previously. 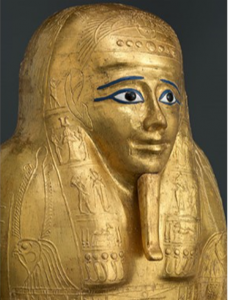 The Coffin of Nedjemankh, described as ‘an extraordinary work of art’, ‘beautiful’ and ‘extremely rare’, is reported to have been purchased by the Met in July 2017 from a Paris-based dealer for €3.5m. Despite the ‘rigorous vetting process’ for acquisitions referenced in its press statement, the Met appears to have fallen victim to the – sadly not uncommon – use of falsified documentation, including an allegedly forged 1971 Egyptian export license. After investigations by the Manhattan District Attorney’s office revealed that the coffin had been looted from Egypt in 2011, the Met was quick to remove it from view and to co-operate with the authorities to facilitate its return.

The Met is apparently seeking to pursue all available remedies to recover the purchase price of the coffin. While the basis of such claims isn’t publicly known, it seems likely that they will be grounded in fraud, given the allegations relating to fake provenance documentation. Whatever the nature of the legal claims, any pursuant proceedings will inevitably shine a light on the due diligence processes employed by the Met prior to the acquisition. This is particularly so since it is not the first, or even second time that the Met has found itself in this somewhat compromised position. The very month when the gilded coffin was purchased, July 2017, saw the seizure of an ancient marble bull’s head and an Italian krater from the museum, not to mention the rather infamous case of the Euphronios Krater which involved a prolonged period of negotiation between the Met and the Italian Government before the 2,500-year-old Greek vase was finally returned to Italy in 2008.

In announcing the return of the coffin, the Met’s President and CEO professed the museum’s commitment to identifying “how justice can be served, and how we can help to deter future offenses against cultural property”. A robust, thorough and consistently applied due diligence protocol will lie at the heart of achieving this aspiration, and indeed, the Met has pledged to review its acquisitions programme in light of this latest incident.

In the US, the UK and most jurisdictions, the standards required of institutions by the strict letter of the law fall somewhat below those mandated by codes of ethics. As the ICOM Code of Ethics makes clear, “[E]vidence of lawful ownership in a country is not necessarily valid title” (principle 2.2). Furthermore, “[E]very effort must be made” to ensure that a prospective acquisition has not been illegally obtained or exported, and that due diligence establishes “the full history of the item since discovery or production” (principle 2.3). The bar is thus set high, but it must be regarded as more than aspirational. It is not enough for institutions to pay lip service to the principles of such codes, and the international convention on which they are based (the 1970 UNESCO Convention on the Means of Prohibiting and Preventing the Illicit Import, Export and Transfer of Ownership of Cultural Property). They need to take proactive practical steps and to devote sufficient resources to the often painstaking and laborious process of diligence investigations.

Interestingly, enhanced due diligence requirements may well become legal as well as ethical requirements for the art market before too long. We reported recently on the imminent implementation of new anti-money laundering rules in EU Member States. In the US too, it seems that the art trade could be set to experience increased scrutiny in this regard, if a Bill introduced in May 2018 becomes law at some future point. The Bill, which would apply the Bank Secrecy Act of 1970 to “dealers in art or antiquities” is at its early stages and has attracted a degree of concern from dealers who fear increased costs and bureaucracy. It seems unlikely they will be able to escape a more rigorous regime in the longer term however. Whilst the global art market continues to grow, but stories of murky dealings, fraudulent practices and illicit trade continue to abound, we are likely to see the controls on both the commercial and institutional arms of the cultural sector being tightened up accordingly.