What is the role of the museum in 21st century society? Not a simple question, certainly, but 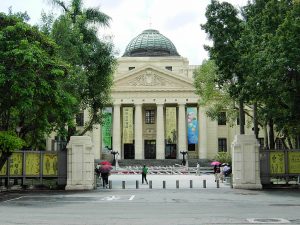 one which a standing committee of ICOM, the International Council of Museums, has been actively considering for almost a year in pursuit of a new way of defining a ‘museum’. The process was intended to have reached its conclusion this weekend, with a vote on the proposed new set of words set to take place at an Extraordinary General Assembly of ICOM in Kyoto, Japan. Instead, however, the decision was taken to postpone the vote, following strident opposition to the form of words proposed. According to the ICOM Facebook page, quoting ICOM’s current president Suay Aksoy, the decision to delay resulted from “one of the most democratic processes in the history of ICOM”.

The quest for a new set of words, in itself, is nothing new. Indeed, there have been numerous amendments to ICOM’s ‘museum’ definition over the years since the founding of the organisation in 1946. The difference this time, however, was that an entirely new approach was applied. The tweaks and clarifications of the past were replaced by a root and branch overhaul. Perhaps unsurprisingly, this sparked controversy which ultimately led to the request to postpone the vote, apparently submitted in August by a group of dissidents including 24 national ICOM branches (among them, France, Italy, Spain, Germany, Canada and Russia).

Why this deeply-felt level of concern and acrimony? For some museum professionals familiar with the existing form of words and comfortable with what they mean for their institutions, the new direction was a step too far. The previous definition spoke of institutions “in the service of society and its development…” conserving and exhibiting tangible and intangible heritage “for the purposes of education, study and enjoyment.” The new proposal bore little resemblance to its predecessor, focusing very heavily on the collaborative, ‘co-productive’ role of museums which were described as “democratising, inclusive and polyphonic spaces”. They were referred to as arenas where “the conflicts and challenges of the present” are addressed, “diverse memories” are safeguarded for future generations and “equal rights and equal access to heritage” are “guaranteed” for all people. Social justice and planetary wellbeing were listed among the diverse and ambitious goals to be encompassed within the museum’s mission.

The rather political overtone was one of the causes for complaint from a number of sources. Juliette Raoul-Duval, chair of ICOM France, denounced the proposed definition as an “ideological” manifesto. François Mairesse, a professor at the Université Sorbonne Nouvelle and the chair of the International Committee of Museology, meanwhile, was so concerned that he resigned from the ICOM standing committee established to run the project to reformulate the new definition (the Standing Committee for Museum Definition, Prospects and Potentials (MDPP)). In his view, the proposal was not a definition but a “statement of fashionable values, much too complicated and partly aberrant”. As a matter of process, it was perhaps somewhat irksome to the various complainants that, despite an open call from ICOM for suggestions and a webpage publicising these, the final form of the proposal came directly from the standing Committee (the MDPP). In her interesting vlog outlining the project, the Committee’s chair, Danish curator Jette Sandahl, rather ironically speaks of the importance of the definition in creating a “shared framework for museums across the world”. Sadly, this collaborative spirit was a little lost as the process to establish the new definition stumbled towards its controversial climax.

Another interesting point raised by Sandahl was that, in some countries, the definition has a role to play in the legislation governing museums. This indeed is an important issue, and one of concern for François Mairesse, who was quoted as commenting that “It would be hard for most French museums—starting with the Louvre—to correspond to this definition……. ICOM’s statement can be included in national or international legislation and there is no way a jurist could reproduce this text.”

This concern is likely to be shared in other jurisdictions too. Mavis Ku, a Ph.D. student from Taiwan, currently researching the right to cultural participation and museums at Leicester University, described how Taiwan’s current Museum Act defines museums in line with the earlier ICOM definition, emphasising educational outreach and preservation, restoration, and research of tangible and intangible artefacts. A new form of words speaking of ‘democratising’ and ‘polyphonic’ roles for museums would sit rather uneasily next to this.

ICOM’s work to find the right words to describe cultural institutions operating in different jurisdictions, geographies, systems and contexts will continue. The goal is a laudable one. There can be no denying that the role of museums has changed very significantly over the past half-century. The drive towards greater collaboration between museums and the communities they serve has been a hugely positive force and is reflected in so many of the conversations we reflect upon in this blog, week in week out. It is integral to the current debates about restitution, for example, and is central to concerns over how museums should be funded. In its quest for a one-size-fits-all solution, however, ICOM’s project was always going to be fraught with internal tensions and contradictions. Ultimately, it has raised the fundamental question as to whether a single set of words can possibly succeed in capturing the diversity and plurality so highly prized in the 21st century museum sector.