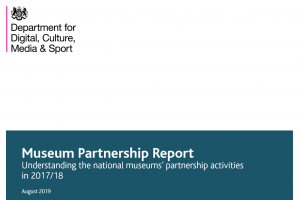 It’s not often that the topic of art loans makes headline news, even in the cultural sector. Although loans of works of art and cultural artefacts represent the lifeblood of many institutions across the globe, they generally proceed under the radar, with little fuss or fanfare. The occasional blockbuster exhibition might attract press comment, drawing the attention of the wider public to collaborative projects between museums, but generally, the painstaking work of registrars and curators to bring their institutions’ works to new audiences go largely unnoticed and unacknowledged. An important report on the partnership activities of the UK’s national museums, however, published by the UK Government’s Department for Digital, Culture, Media & Sport (DCMS) last month, has sparked interesting debate from a number of angles. The Report sits alongside a ‘Museums’ Partnership Framework’ which, like the Report itself, resulted largely from the Strategic Review of DCMS-Sponsored Museums carried out by Neil Mendoza in 2017.

The crucial role played by art loans in the UK cultural sector was writ large throughout the Report. The figures quoted were impressive, by all accounts. In 2017/18, the number of objects loaned by the nationals was stated to be almost 450,000 (of which close to 70,000 were for display and over 365,000 for research purposes). Of course, the devil is always in the detail, and a number of questions have been raised by those who assiduously worked through the statistics behind the headline figures. An article by the UK Museums Association questions whether the inclusion of long term loans (which actually make up nearly 53,000 of the 70,000 figure) is truly representative of current activity, given that some of these ‘loans’ may have been in place for over 100 years. The inclusion of the Wedgwood collection (around 38,000 objects acquired by the V&A in 2014 which remain at the Wedgwood Museum in Stoke on Trent) also takes a little of the shine off the global figure.

By its own admission, however, the Report is a starting point. It is the first time the DCMS has collected this kind of data on such a scale and it acknowledges that this has required it to adopt a “broad and flexible definition of partnerships”. It intends to repeat the process annually, which will hopefully mean that the critics’ questions can be addressed, the wrinkles ironed out, the process improved and the results refined.

In the meantime, it is at least encouraging that the sector is receiving this level of governmental scrutiny and in particular, that the importance of loans between museums is being properly acknowledged. The benefits of loans are highlighted throughout the Report. These include that they allow institutions to stage exhibitions and displays which would not otherwise be possible, to re-contextualise existing collections and to engage new audiences. Co-curation opportunities are created, such as those being developed by the British Museum in collaboration with regional institutions for an interesting exhibition of contemporary drawing to be launched later this month. Loans often lead to long-term partnerships involving fruitful co-working and mutual exchanges of both artefacts and knowledge. On the international stage, sharing collections “builds and maintains the national museums’ reputations as world-leading institutions…[driving]… economic growth and tourism, cultural diplomacy and cultural exchange”. In the words of the Minister for Arts, Heritage and Tourism, Rebecca Pow, the success of this partnership represents “UK soft power at its best”.

Reasons to be cheerful, no doubt!

Without wishing to rain on the parade, however, the clouds on the horizon are perhaps a little too obvious to overlook. As the Report acknowledges, the lending and borrowing process has a “significant cost attached to it”. Indeed it does, which makes the comments in the ‘Museums’ Partnership Framework’ about the “absence of additional funding” and the need for “low-cost solutions” all the more worrisome.

The search for such ‘solutions’ may, of course, take on a whole new twist over the coming months in light of the imminent political changes ahead for the UK. Many within the sector were undoubtedly struck by the ironic timing. On the one hand, they are urged to enhance their lending activity and to capitalise on the ‘soft power’ this builds for the UK. On the other, they are presented with challenges and uncertainties on a scale difficult to contemplate in the wake of Brexit, and its highly significant implications for the cultural sector.

As the Brexit debate inevitably dominates the UK political landscape once again this week, the sector is fast gearing up to face the potential ramifications. In an interesting survey of reactions to the Government’s recent decision to prorogue Parliament, the Art Newspaper encountered ‘outrage and disbelief’ among many of those interviewed. Whilst matters of high politics, constitutionality and democratic process are of deep and serious concern, the immediate worry for those trying to plan loan transactions and collaborations which extend beyond 31st October relates to the practical questions they have been raising for some time. Will transport arrangements for loan objects be affected, for example? Will the ports grind to a halt in the face of new bureaucratic hurdles? Will delays at the border risk physical damage to objects? Will there be additional import and export considerations? Will visas be required for couriers and curators travelling with them? It seems highly likely that all of these factors could mean significant increases in the costs of lending and borrowing.

All in all, the mandate to museums to lend more and spend less at a time of unprecedented uncertainty is a tough ask. The sector is nothing if not creative, and it will be interesting to see how new ways of working will develop over coming months and years. Necessity, as they say, is the mother of all invention. It is to be hoped that cultural collaboration will continue to flourish despite the potential for political upheaval and the practical and financial consequences it may bring in its wake.