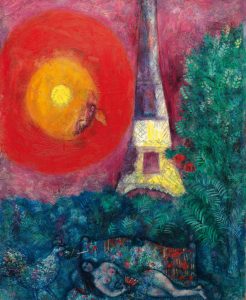 Marc Chagall, La Tour Eiffel (1929), the work which the National Gallery of Canada is planning to sell in May

As reported earlier this month, the National Gallery of Canada has plans to sell a painting from its collection by artist Marc Chagall at Christie’s in New York on 15 May. The funds will be used to acquire a work by Jacques-Louis David, which was confirmed this week by the Gallery. The Chagall piece on the chopping block is La Tour Eiffel (The Eiffel Tower), a work in oil dating from 1929. The plans include the sale of a number of lesser items from the National Gallery’s collection as well, including pieces of ancient art.

It may seem surprising to some that a public institution – and indeed the country’s national art gallery – can sell a work with relative ease, and seemingly little transparency. While approval of the sale was apparently given by the gallery’s board last December, the issue only reached the public eye two weeks ago. The piece was listed in the Christie’s catalogue on 21 March with little initial fanfare. However, the matter has since exploded in Canada, with much circumspection and bewilderment at the attempted sale (see in the Globe and Mail and CBC for early examples, and here too).

Believe it or not, the National Gallery of Canada is not restricted by legislation from selling pieces from its collection. The limitation is that the proceeds be used to further the collection. But otherwise, the governing legislation (the Museums Act (1990), ss 4-6) does nothing to restrict a sale like the one involving La Tour Eiffel.

Contrast this with the rules governing the UK’s National Gallery. Under the Museums and Galleries Act 1992, the British institution is not allowed to sell any part of its collection on the open market. The only way to dispose of a work is to transfer it to another British national collection. Prior to 1992, even this last possibility was precluded. And consider the legal rules governing the National Gallery of Australia – perhaps more comparable to the Canadian collection – which place significant restrictions and procedures on the sale of works from the collection. These restrictions and procedures have no legal equivalents in Canada.

Now of course the more laissez faire legislative approach in Canada doesn’t mean its National Gallery can – or will – deaccession items willy-nilly. There will be important ethical considerations taken into account and an internal disposition policy that has to be followed. Indeed internal gallery support for the Chagall sale was reportedly unanimous. ‘There are about eight PhDs in art history who agreed that we were proceeding properly,’ said the Gallery’s Director. ‘These are advisers to our acquisition committee, the curators who identified this work as the right one.’ The only problem is that while the decision was being made, the public knew nothing about it.

The timing of the Canadian announcement is somewhat startling. Only this month did the Berkshire Museum in Massachusetts finally get court approval for the sale of 40 pieces from its collection (we reported on this story late last year and will have a thorough account of this latest development over the next few days). There is the attempted sale by La Salle University in Philadelphia too. The difference is that these American cases involve sales with an intent to use the proceeds towards various costs of the institution, not for the acquisition of new works. So the examples are a little more egregious – which partly explains the backlash that these attempted sales received. But at the same time, these were private museums, with no public accountability. The Canadian example involves a public gallery – the country’s pre-eminent national collection, no less. It seems strange that the public has had no say, and no oversight, in the matter.

I wrote an op-ed piece for the Globe and Mail on this issue, which ran on Friday 13 April, and included a number of the details and points made above.