In 1961, when he was in his thirties, American Pop Artist Robert Indiana stencilled a call for peace from Longfellow’s The Song of Hiawatha into his painting, The Calumet.  Regrettably, as Indiana was passing away last year at his home in Maine, his world was anything but peaceful. Indiana’s legacy and art had become entangled in legal conflict that has only escalated since then. The litigation highlights the issues raised when an artist does not clearly control the creation and memorialization of his work.

On May 18, 2018, a lawsuit was filed in the Southern District of New York by Indiana’s long-standing art representative, Morgan Art Foundation Limited, that asserted sundry claims against four defendants: American Image Art (“AIA”), a publishing company that had contracted with Indiana; Michael McKenzie, AIA’s sole proprietor who is allegedly responsible for roughly $30 Million in Indiana forgeries; Jamie Thomas, a fisherman turned assistant, caretaker and attorney-in-fact for Indiana; and James Brannan, personal representative of Indiana’s $60 Million+ Estate.

Morgan’s core factual allegation is that the defendants were flooding the market with artworks that were not, in fact, created by Indiana, who was too infirm to create or even supervise the creation of new work. For their part, the defendants maintained that Morgan was, among other things, interfering with their contractual rights. 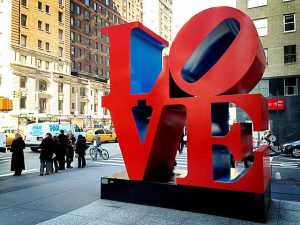 Morgan asserted an array of claims against the four defendants originally named, including violation of moral rights legislation known as the Visual Artist’s Rights Act of 1990 (“VARA”), trademark and copyright infringement, defamation, unfair competition, and breach of/interference with contracts. The contracts and contract amendments referenced in Morgan’s claims vest Morgan with intellectual property rights for paintings and sculptures “conceived” by Indiana from 1960 to 2004, including his LOVE, AHAVA, AMOR, YALE and Numbers artworks; and exclusive rights to produce, fabricate and sell Indiana’s LOVE, AHAVA, AMOR, ART, 2000, and Numbers sculptures “in specified colors, dimensions, and edition sizes”.

By the end of 2018, nine parties were involved in this suit with a complicated web of claims spun among them. Three motions to dismiss claims, one motion to stay claims and a motion to post bond were filed. Because several contracts at issue contained New York choice-of-law clauses and some defendants resided in and/or maintained offices in the state, the Court applied New York law, with authority from Maine, substantively similar to New York, cited on some points.

On July 1, 2019, the Court issued a 47-page opinion that substantially narrowed the case.  The remnant of surviving claims spins a tale of alleged forgery, reputational finger-pointing, and a stalled Catalogue Raisonné.

Many of the Estate’s eight counterclaims against Morgan and its affiliates were dismissed for being improperly pled. The single exception to this was the Estate’s claims over “Semi-Precious Stone Sculptures” created with Indiana’s LOVE design. The Estate alleged Indiana “had strong opinions about the design elements and specifications for his ‘LOVE’ sculpture”, and the Semi-Precious Stone Sculptures were “never approved”.  The Court held these allegations passed muster because they gave “fair notice” to Morgan.

The Court rejected Morgan’s argument that Indiana had contractually waived his moral rights under VARA related to the Semi-Precious Stone Sculptures. Morgan cited an agreement whereby Indiana had consented to placement of his signature on LOVE reproductions. Nothing in the agreement, however, met the requirements for waiver of Indiana’s moral rights under VARA, such as the VARA specification of setting forth the uses to which the waiver applies.

One aspect of the Estate’s surviving unfair competition claim could have a resounding effect on Indiana’s legacy. It arises out of a one-sentence agreement Indiana signed with Morgan’s advisor, Simon Salama-Caro, for “preparation” of a catalogue raisonné of Indiana’s complete oeuvre. The catalogue raisonné is important because only works authorized by Indiana would be included; thus, artworks alleged to be inauthentic in this case arguably would be excluded.

The opposing parties offered drastically different interpretations for the word “prepare”. And, the Court found it was possible Indiana wanted Salama-Caro “to work out the details of” the catalogue raisonné, but not “to shepherd the project to its conclusion”, including publishing the catalogue; and it was also possible Indiana wanted him “to oversee the entire catalogue raisonné process”. In light of such divergent interpretations, the true meaning of this contract – what the artist wished for the comprehensive listing of his work – must be submitted to a trier of fact. 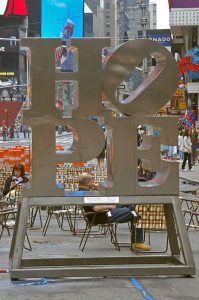 Most of AIA’s claims stem from a contract and four addenda Indiana entered into with AIA from 2008 to 2012, in which AIA received production rights for sculpture and prints of Indiana’s HOPE artwork. In its only allegation to support alleged contractual interference by Morgan, AIA asserted Morgan’s interference was “intentionally designed to disrupt” AIA’s contract. Yet, AIA failed to provide sufficient detail about the alleged scheme.

In the Court’s view, AIA contradicts itself on an issue pivotal to its claims – the reason for the decline in HOPE sales from 2009 onward. In its answer, AIA stated that HOPE sales declined due to a decreased excitement for the Obama campaign (which it was used to advertise) and because of the art market’s “Great Recession”. Later, in its opposition to the dismissal motion, AIA alleged Morgan “duped” Indiana into believing he had not authorized certain HOPE designs, and this led to Indiana’s failure to promote HOPE artworks and a decline in HOPE sales. The Court refused to consider these untimely allegations.

Of the many legs on AIA’s contentious slander of title claim against Morgan, only one withstood dismissal – AIA’s very specific allegation that Morgan “told Contini Art Gallery” that AIA “was forging HOPE [a]rtworks that Indiana authorized.” It will be interesting to see whether this portion of the claim continues much further.

In addition to the pending New York federal action, other lawsuits have sprung up that relate to Indiana. Jamie Thomas filed an action in Maine against Indiana’s Estate for payment of his attorneys’ fees. Additionally, the Estate filed an action in New York State Supreme Court against AIA and McKenzie, seeking a preliminary injunction in aid of arbitration. Similar to a failed effort by McKenzie to stay Morgan’s claims in the federal action, McKenzie also attempted to delay the New York state action. Those efforts were rebuffed by the Court, which has held steadfast to an upcoming August 21 hearing date at which time McKenzie and AIA will be required to show cause why a preliminary injunction should not be entered to prohibit their sale, consignment, or transfer of any putative Indiana works, including Indiana’s iconic HOPE.