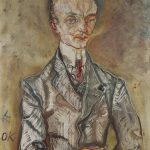 Tonight, Sotheby’s auction house in New York will hold a major sale of early 20th century European masterworks, including pieces by Kandinsky, Monet, Magritte and Miró. But perhaps most exceptional will be three restituted works that had been spoliated during the Nazi period. Two of these were returned to the heirs of Alfred Flechtheim, a Jewish art dealer who fled Nazi Germany at the end of 1933, within a year of Hitler’s ascent to power. The Flechtheim pieces consist of Ernst Ludwig Kirchner’s bleak portrayal of a shower for WWI servicemen, Artillerymen (Das Soldatenbad) from 1915, and Oskar Kokoschka’s penetrating study of an aristocratic dandy, Joseph de Montesquiou-Fezensac (1910) – who, for Proust fans, is the model for the marquis de Saint-Loup in À la recherche du temps perdu.

The Kirchner was restituted to the heirs from New York’s Guggenheim Museum last month, while the Kokoschka was returned from Sweden’s Modern Art Museum in September. Both works are being sold with an estimate of $15 million to $20 million. For more information see Catherine Hinkley’s article from The Art Newspaper and Sotheby’s press release. It is unclear whether some sort of financial deal was struck between the respective museums and the heirs, but it is entirely possible, considering how quickly the pieces came to auction. 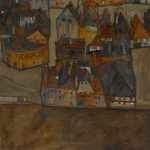 Also in the auction is a work by Egon Schiele, City in Twilight (Dämmernde Stadt) from 1913, which had been taken from the Austrian Koditschek family in 1940. In that case, as is made clear in the press release, a sharing arrangement was agreed to between the heirs of Elsa Koditschek and the present owners. The harrowing story of how Elsa survived the war has been provided by Sotheby’s here.

UPDATE (13 November 2018): All three works sold at Sotheby’s auction last night, all well above their pre-sale estimates, and each for over $20 million.