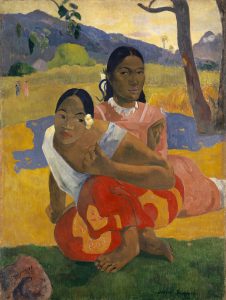 On 14 May 2019 the Court of Appeal of England and Wales (Lewison LJ, Lindblom LJ, Rose LJ) unanimously dismissed the appeal by Ruedi Staechelin and his fellow trustees against the decision of Morgan J dated 16 January 2018. By his judgment Morgan J had held that a commission of US$10 million was payable to art consultant Simon de Pury following the US$210 million sale of Gauguin’s painting “Nafea faa ipoipo” (left) on the basis of an informal oral agreement (my case note on the first instance decision is part of the 2018 volume of Art Antiquity and Law here).

As Lewison LJ, who gave the lead judgment, explained, the central case for the trustees was that, in breach of fiduciary duty, Mr de Pury had agreed with the buyer’s representative to conceal the truth about a previous offer of US$230 million and that Mr de Pury had failed to tell Mr Staechelin or his fellow trustees that the representative’s statement that he had “never made a formal offer” of US$230 million was untrue. By failing to give that information to Mr Staechelin or the other trustees, it was argued that Mr de Pury had forfeited his right to any commission.

Describing the judge’s overall conclusion as “unimpeachable” the Court of Appeal refused to interfere with the findings of fact made by Morgan J that there was no such collusion. Although Morgan J had found that neither Mr Staechelin nor Mr de Pury was a reliable witness, and described part of Mrs de Pury’s evidence as “astonishing”, the challenge by Mr Staechelin and the trustees to his overall assessment of the evidence was held to fall short of the high threshold required for an appellate court to interfere with the trial judge’s conclusions on primary facts.

The Court of Appeal also rejected the trustees’ narrower argument that even on the basis of the judge’s findings of fact Mr de Pury was guilty of a breach of fiduciary duty such as to disentitle him to his commission. The trustees said that Mr de Pury breached his fiduciary duty by not informing one of the other trustees apart from Mr Staechelin that the statement by the seller’s representative that there had never been an earlier formal offer of US$230 million was false. Whether or not that may have been a breach of fiduciary duty on the part of Mr de Pury, the Court of Appeal was clear that any shortcoming in not passing that information on was not of such a sufficient character or consequence to result in the forfeiture of the commission.

Also rejected was the trustees’ argument that the trustees could not be bound by a decision to pay commission taken by only two out of the three trustees. Under the terms of the trust it was argued that it was only if the third trustee had formally declined to participate in a decision that the two remaining trustees could take decisions on their own. The Court of Appeal held that this was irrelevant since the trust also contained a provision stating that third parties were not bound to inquire into the authority for any action by the trustees. In the light of that provision, a person dealing with the trustees did not need to inquire into whether a third trustee had or had not formally declined to participate in a decision in the manner required by trust.

Although the appeal by the trustees was described as a “sustained” attempt to overturn the decision of Morgan J, it was dismissed on all counts with the result that the obligation to pay Mr de Pury his commission was upheld.

Michael Bowmer is a barrister at 4 New Square, Lincoln’s Inn in London.