Bosworth, the battle that killed the last of the Plantagenets, Richard III, and saw the start of one of the greatest ruling dynasties – the Tudors – may soon be the location of a £26m driverless car testing facility. Councillors from Hinckley and Bosworth Borough Council approved the planning proposal by Japanese-owned Horiba Mira by 12 votes to five on September 25th. The total size of the test track will be 12 million square feet, and though only a small proportion of this will be on the actual battlefield itself, it will lie in close proximity to the location where Henry Tudor is believed to have amassed his troops and surveyed the land before the final push.

While this vantage point lies outside the battlefield boundary, historians believe it is vital to understanding the battle and consider that the encroachment of the test track would be a tragic loss. Furthermore, archaeological survey and fieldwalking have revealed much material, spanning prehistoric periods to post-medieval. 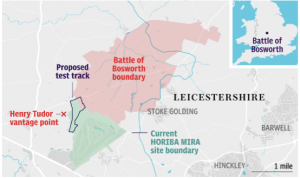 A petition signed by more than 4000 people, including numerous historians and archaeologists urged the Council to reject the plans. As a Registered Battlefield, Bosworth is designated under the National Planning Policy Framework as a heritage asset of the highest importance. When determining applications, the local planning authorities should assess the significance of any heritage asset and consider the desirability of preserving it, considering how it can have a positive contribution on communities and their economic vitality. In particular any “substantial harm or loss of a … designated heritage asset of the highest significance … should be wholly exceptional”.

At the same time, the planning authority should also consider the desirability of the new development and whether it will make a positive contribution to local character and distinctiveness. In this case, the test track would lead to more than 1000 jobs and therefore benefit the area significantly. On the other hand, the battlefield’s visitor centre and further historic and archaeological research would be affected.

It is highly likely that this decision will be challenged by the various interested parties, and there have been suggestions that the decision may be vulnerable to judicial review (an action which would need to be brought within three months of the decision). We will follow ongoing developments with interest.

Keep in mind that the remains of Richard III, who died at Bosworth in 1485, were unearthed underneath a carpark in Leicester in 2013. These became the subject of their own judicial review, when a group claiming to represent descendants of the King challenged the decision to have the bones reburied at Leicester Cathedral. The challenge was ultimately unsuccessful.