It might come as a surprise that a Marvel comic book for children could stir so much controversy to the point of having the mayor of one of Brazil’s largest cities ordering its seizure from a book fair, followed by a rushed lawsuit at the state courts and a subsequent ruling from the country’s Supreme Court countering the censorship attempt – but alas, this is precisely what happened at the Bienal do Livro (Book Biennial) at Rio de Janeiro earlier this month. 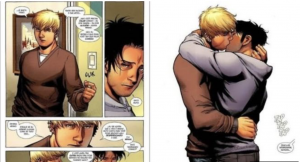 It all started on September 5th when Rio de Janeiro’s Municipal Department for Public Order (SEOP), following orders from Rio’s mayor, Crivella, issued a notification to the organisers of the Biennial. The notification stated that the comic book in question contained sexual content that would be inappropriate for children and teenagers. It also stated that the comic book could only be kept in the fair’s stands if it would be sealed with a black wrapper and have labels warning as to the explicit sexual content of the images. The notification further alerted that non-compliance would lead to the items being seized and that the licence for the event could also be revoked. In a public statement, Crivella defended the measure by saying that it was his duty as mayor to ‘protect the young people of our city’.

The organisers of the Biennial stood their ground and responded that the event was meant to cater to a diverse audience by being inclusive of all members of the public; that if visitors purchased items they were not satisfied with they could return them, as their consumer rights entitled them to and moreover, most of the copies of the comic book in question seem to have already been sold by the time the notification was received, as reported by one newspaper.

Fearing that this would not be the end of the matter, the organisers of the Biennial also rushed to the state court of Rio seeking a preliminary injunction against the municipality so that its agents would not be allowed to seize the comic book. The judge found in their favour and granted the injunction order on September 6th. The ruling stated that the ‘municipality could not remove the comic books from circulation based purely on their content’. It also stated that the municipality could not revoke the licence for the event to take place.

The mayor and his team hurriedly filed an appeal against the preliminary injunction. This time around, the state court of Rio found in their favour. The ruling stated that the municipality’s actions were lawful and did not constitute any hindrance to freedom of expression. This is because, in the court’s view, the municipality’s main concern had been to safeguard parents’ prerogative to choose what content their children are exposed to and to ensure said content was fitting with their views on how to raise their children. Therefore, this prerogative regarding children’s education was an overriding interest in relation to the general protection afforded to freedom of expression.

Unrelenting in their efforts to allow exhibitors at the Biennial to freely offer the comic book for sale, the organisers then turned to Brazil’s Supreme Court (Supremo Tribunal Federal). Luckily for them, the Supreme Court found in their favour and overturned the decision of the state court on the appeal. The Supreme Court’s judge stated that he ruled in this manner in order to ‘oppose censorship to the free flow of ideas, the freedom of artistic expression and the freedom of expression in this country’. The judge also suggested that the municipality’s challenge stemmed from discrimination and prejudice rather than a real wish to ‘protect the young people of our city’. It is also questionable whether a simple kiss on the mouth can be considered explicit sexual content that would be inappropriate to children and teenagers, since a kiss on the mouth is a socially accepted behaviour often seen in public.

Funnily enough, all the controversy only helped further the sales of this particular comic book. When contacted by BBC Brazil, the illustrator of the comic book joked that he wondered if the mayor of Rio would be willing to do the PR for his next publications, as he so successfully drove sales up. As the saying goes, all is well that ends well and luckily there was a happy ending to this legal marathon through the courts of Brazil in the short period of three days. Moving forward, however, this episode only highlights the extent to which Brazil still needs to carefully consider what level of protection it affords to freedom of expression and what kind of art and images will be socially accepted.