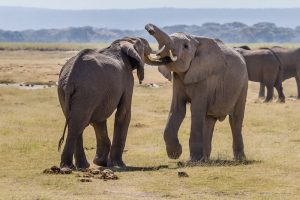 The controversy surrounding ivory and the restrictions imposed on its trade is certainly continuing to smoulder. As we reported a few weeks ago, the results of the UK Government’s consultation, and its proposals for a wide-ranging ban on ivory trade met with a mixed response. To add fuel to the fire, a dispute that has so far remained in the political sphere is now entering the courtroom, as litigation is commenced in the United States. This side of the pond, the protesting voices are also growing somewhat louder.

Just two days after DEFRA announced the results of its consultation in the UK last month, two art dealers’ associations in the United States – NAADAA (The National Antique & Art Dealers Association of America) and AADLA (The Art & Antique Dealers League of America) – filed a class action against a New York state law that places stringent restrictions on the trade in ivory artefacts in that state. Not much has been reported on the case to date as there have been no further developments, but reading between the lines, the main argument seems to be that the state law prohibits something that would be permitted under federal law (owing to discrepancies between the two in respect of an exemption for antiques). Nonetheless, the filing of the lawsuit in and of itself certainly marks a new stage in an already highly charged debate.

The New York State law at the heart of the controversy (bill A10143) came into force in 2014 and was backed by the NY governor, Mr Andrew Cuomo. Surely no coincidence, the governor signed the bill on August 12thof that year, World Elephant Day. At the time, this was a popular measure amongst voters with reports claiming that 80% of voters supported the new law. The text of the law is very restrictive as it prohibits ‘the purchase and sale of ivory articles and rhinoceros horns’as well as increasing the penalties for violations of these regulations. Furthermore,‘ivory articles’ are taken to encompass ‘any item containing worked or raw ivory from any species of elephant or mammoth’ (our highlights).

Like the proposed DEFRA ban, the NY State law has a few exceptions, under which, with the proper licensing, trade in ivory articles or rhinoceros horns is permitted so long as (i) the material in question is placed in a ‘bona fide antique’and comprises less than 20% of the total volume of said antique. In order to be classed as antique, the object must be at least 100 years old and have the proper documentation to show its provenance and age;  (ii) it involves distribution and/or change of possession between accredited museums or for educational or scientific purposes; (iii) it involves distribution by inheritance or to the legal beneficiary of a trust; (iv) the object in question is a musical instrument, so long as it was made before 1975 and has the proper documentation regarding its provenance and age. The prescribed sanctions involve criminal charges (with possible imprisonment) and the payment of fines.

The restrictions in place in New York are somewhat similar to the ones currently proposed in the UK and the discussions and developments fomented by this class action might well inform the course of the debate in the UK.

Indeed, it looks as if the debate on home soil is already starting to shape up in similar fashion, as UK dealers’ associations are starting to mobilise themselves and seek legal advice. The most vocal bodies on this side of the pond so far have been BADA (British Antique Dealers Association) and PMSA (Public Monuments and Sculpture Association). In a call to rally forces and gain support, they have made a public appeal in the Antiques Trade Gazette, for the key prerequisite of any legal challenge: funding. In the statements released so far by these two bodies, they have suggested that they will be exploring a number of issues relating to the proposed ban and the PMSA is seeking advice on whether the ban might involve potential contraventions of human rights legislation as well as raising questions about the consultation process itself. In an open letter from John Lewis, chairman of PMSA to the ATG (issue 2341, p. 6), Mr Lewis suggests that the consultation questions ‘(…) gave the impression of seeking justification for a decision already taken [and] was no consultation at all (…)’. The trade bodies were, of course, also quick to point out their absolute opposition to the illegal trade in poached ivory.

In the meantime, a DEFRA spokesperson confirmed to the ATG that DEFRA “engaged with stakeholders” during its 12-week long consultation and that the proposed ban “takes account of the views and evidence received” (issue 2341, p. 1). It remains to be seen how far the opponents of the ban in its proposed form will be prepared to take their challenge but what is fairly clear is that this is far from the end of the story and there will no doubt be a few twists and turns to come.