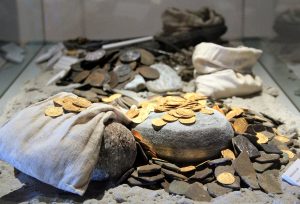 It has been a tumultuous fortnight in Europe in the world of art crime. First, we heard about the audacious attempt to steal two Rembrandts from London’s Dulwich Picture Gallery – thankfully unsuccessful with the perpetrators being apprehended and the paintings recovered within the grounds of the gallery. Then, yesterday, news broke of a heist in Dresden involving the city’s ‘Green Vault’, (Grünes Gewölbe) one of Europe’s largest treasure collections. This time the outcome was more serious. The thieves apparently made off with three diamond jewellery sets described by the general director of Dresden’s state art collections as ‘priceless’. A specialist team has been set up to investigate the case.

Sandwiched between these two raids, both of which are more the stuff of movie storylines than the daily news, came the conviction and sentencing of two metal detectorists in the UK. The perpetrators had discovered a hoard of approximately 300 coins near Leominster, Herefordshire, in 2015. The find, thought to hail from the two ninth century kingdoms of Wessex and Mercia, is estimated to be worth around £3 million. Rather than declare it, as required under the Treasure Act 1996, the detectorists instead tried to sell the hoard, the majority of which has not been recovered. Thus the web of deceit and criminality extended further, drawing in the dealers involved in the attempted sales.

Several intriguing issues arise from these recent cases which touch on points we have discussed in previous blog posts. The charges themselves are interesting. The convictions were not for what one might consider to be the most obvious offences (those set out in the Treasure Act)* but for the general offences of theft and conspiracy to conceal**. Undoubtedly, the much more severe sentences available for the latter offences were highly influential here (a maximum of 14 years imprisonment for concealment offences versus three months for the ‘failure to notify’ Treasure Act offence). There are reports of a Proceeds of Crime Act hearing scheduled for next year which could potentially result in a swingeing confiscation order and a significant uplift to the sentences in the event of any confiscation order not being satisfied.

Even without any uplift, the sentences imposed were substantial and mark this case out as highly significant. The severe hand dealt to the perpetrators reflects the increased understanding by the courts, and other interested parties, of the particular nature of the damage wrought by offences against heritage. This relatively new-found appreciation of the perils of heritage crime is perhaps evidenced most concretely in a change to the sentencing guidelines for certain theft and criminal damage offences, whereby ‘damage to heritage assets’ is now to be considered an aggravating factor.

The wider damage resulting from the loss of the hugely important hoard in the current case attracted comment from numerous quarters. Archaeological experts contended that the hoard had the potential to ‘rewrite history’, demonstrating an alliance between Alfred the Great, ruler of Wessex and Ceolwulf II who ruled over neighbouring Mercia (a story we covered on the blog in relation to another nighthawking raid). It thus shone new light on “a key moment in the unification of England” according to Gareth Williams, curator of early medieval coins at the British Museum. The local authority teamed up with local experts to submit a ‘victim impact statement’ to the court to assist in sentencing. This submission noted the ‘significant and irreversible harm’ rendered to the site which means that it may never be possible to ascertain the precise sequence of events relating to the burial of the coins or how individual artefacts relate to the hoard . The enforcement authorities reiterated all of these concerns, speaking of the need to cut off markets which serve to “disperse our history, not only across this country, but across the world” in the words of Amanda Blakeman, West Mercia Police’s Deputy Chief Constable. Finally, the Judge himself told the defendants that they had not only cheated the landowner but also the public “because the treasure belongs to the nation” and should be “seen and admired by others”.

The gravity of the loss resulting from thefts of cultural treasures was echoed by the German authorities left shell-shocked by the Dresden heist. Michael Kretschmer, the leader of Saxony said he was devastated: “Not only the gallery has been robbed, but also the Saxonians”, and Saxony’s Interior Minister, Roland Wöller, spoke of the stolen treasure’s “intangible worth to the state of Saxony, which is impossible to estimate”.

If bad luck really does strike three times, it is to be hoped that the authorities responsible for policing art crime will have a quieter time in the coming months. Whilst it may be disheartening that heritage crime shows few signs of abating, perhaps at least a little comfort can be taken from the robust response to these offences. The Government’s recent attention to the treasure legislation is also encouraging, and we look forward to hearing the result of the consultation on reform of the Treasure Act to which we responded earlier this year. Whether the changes proposed would have made a difference to the current case is unclear, but the discussion itself is of value. The more attention paid to the issue of heritage crime, the better equipped the authorities will be to address it and the stronger the deterrent effect on potential offenders.

* See s. 8: This offence, of failing to notify to the coroner the find of an object which the defendant believes or has reasonable grounds to believe is treasure within the stipulated period carries a maximum sentence, on summary conviction, of imprisonment for a term not exceeding three months (with or without a fine).

** See Proceeds of Crime Act 2002 s. 327, which covers the offences of concealing and converting criminal property which carry a potential sentence of imprisonment for 14 years or a fine or both.